The SMSF Global Worker and Retiree

There is no doubt that superannuation is taxed at low concessional rates in Australia – 15% for those in accumulation and tax free for those in pension stage.  More importantly for those members who are over age 60 and able to access their benefits – any pension or lump sum payments are tax free. Is there any wonder why UK residents are moving to Australia and transferring their pension plans to a qualifying SMSF? Live in Australia – enjoy all that Australia has to offer – pay no tax on income in the fund or when withdrawn post age 60 as opposed to living in the UK and paying tax on pension income at marginal tax rates.

It’s certainly not strange to think of Australia being the world’s best retiree tax haven – provided you have a visa or permanent residency to stay here. In fact, many countries welcome retirees who have financial cash to splash around with special purpose retiree visas. Why not Australia? I think it would be a great idea to let any non-resident invest in Australia through a SMSF and not make the fund non-complying. After all, wouldn’t we be getting investments and tax that we would otherwise miss out on??

But this is not the case, so we are left with a system that makes a non-Australian super fund a non-complying fund. Let’s look at a case study on how the laws work now:

John Jones is going overseas for a short term holiday but has enquired of a retirement visa in Thailand with the potential loss of the Australian Residency for taxation purposes. What happens to his SMSF and what are the conditions needed to remain a complying SMSF?

This question is paramount for income tax purposes.The consequence of being an Australian Superannuation Fund is that the fund includes in its assessable income the ordinary and statutory income the fund derived from all sources, whether in or outside Australia during the income year. If the fund is a complying superannuation fund in relation to the year of income, this income will be taxed concessionally at 15% and entitled to a tax exemption for pension income. However, if the fund is non-complying, the income will be taxed at the highest tax rate, that is 45%.

According to the section 42A of the SIS Act 1993, a complying SMSF is a resident regulated superannuation fund, which is defined as an Australian Super Fund with the meaning of that term in the ITAA 1997.

In that regard section 295-95(2) of the ITAA 1997 provides 3 tests that a fund must satisfy to be treated as an Australian Super Fund:

Tax Ruling TR 2009/5 provides explanations on these 3 tests. We are going to consider only the CM&C and the active member test as they are the most important when members or trustees go overseas.

In the majority of cases, the other principal areas of operation of a superannuation fund, such as the acceptance of contributions, the actual investment of the fund’s assets, the fulfilment of administrative duties and the preservation, payment and portability of benefits are not of a strategic or high level nature to constitute CM&C. Rather, these activities form part of the day-to-day or productive side of the fund’s operations.

Moreover, subsection 295-95(4) states that the CM&C is ordinarily in Australia at a time even if the CM&C is temporarily outside Australia for a period of not more than 2 years which is to be extended to a generous five years – see Budget Update changes below.

Furthermore, according to the ruling, when there are an equal number of trustees, both in Australia and overseas, who equally participate in the exercise of the CM&C of the fund, the CM&C will ordinarily be in Australia.

In these circumstances, the CM&C of the Superannuation Fund continues to be ordinarily in Australia (by virtue of Richard exercising the CM&C in Australia) within the meaning of paragraph 295-95(2)(b) of the ITAA 1997 at all times during Henry and Eleanor’s absence from Australia.

The other test which needs to be satisfied in order to be treated as an Australian Superannuation Fund is the active member test.

The ‘active member’ test is satisfied if, at the relevant time:

An active member is:

A non-active member is:

Ally, who is the single member of her SMSF goes overseas on a holiday in July 2009 for an indefinite period of time. She ceases being an Australian resident in July 2011. Before travelling overseas, Ally worked as a fitness instructor at the local health & fitness centre. Her employer failed to make any superannuation contributions in respect of the period of work performed by Ally in the quarter prior to her departure (April to June 2009). In August 2012, Ally’s former employer paid the superannuation guarantee charge to the Tax Office which then distributes the shortfall component of the charge to Ally’s SMSF in September 2012. Ally makes no personal contributions to her SMSF during her absence from Australia.

As Ally is not a resident of Australia from July 2011 and the contribution, that is the shortfall component of the superannuation guarantee charge was made to the SMSF on her behalf in respect of the April-June 2009 period when she was a resident, Ally does not become an active member because of the contribution.

Note: The 2021 Budget proposes for a removal of the active member test.  At this time we are unsure if it relates to only the temporary non-residents (soon to be up to five years) or all potential members which leaves open the door for non-residents to own SMSFs as active membership was the roadblock to contributing to super. See the Budget details at the end of this article. 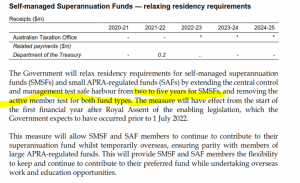 I have a question concerning the tax treatment of lump sums and pensions paid to a 54 year old engineer who has become an Australian resident from a foreign super fund. The client received advice from a major accounting firm stating that the contribution limit caps applied.

We are not so sure and would welcome your thoughts.

There are 4 possible outcomes.

If he receives a lump sum from a foreign fund more than 6 months after becoming an Australian resident he is taxed on the accrued earnings that arose after becoming a resident unless he chooses to roll over the benefit.

In terms of lump sum payments post six months, section 305-70 of the Income Tax Assessment Act 1997 provides that lump sums received from a foreign superannuation fund will be assessable. The method is complex, however in short it is the applicable fund earnings relative to the time that the member is a resident that will become assessable income and taxed at marginal tax rates with no tax offsets. Applicable fund earnings exclude concessional and non-concessional contributions. As it is not an Australian superannuation fund benefit they cannot access tax free super benefits post age 60.

Of course after paying any tax on the foreign superannuation fund benefits, the member may contribute the net proceeds into a SMSF. The contribution will consist of concessional (if a tax deduction is claimed) or a non-concessional component. One of the problems if it is a large amount may be the contribution caps noted above.

If the client receives a foreign superannuation fund lump sum payment after six months, then the member can choose to roll the amount into a complying fund and the super fund is taxed on the earnings that arose after the member became a resident. This will depend on the jurisdiction where the payment is coming from – many do not allow the transfer of pension monies to offshore pension funds. The UK with its Qualifying Overseas Pension scheme allows transfers provided the governing rules of the fund meet certain criteria. These criteria became stricter in 2020 with no ability for the fund to have members receive benefits, under any circumstances until aged 55 plus deeds may need to be reviewed by HMRC – however the LightYear Docs trust deed has just passed such a review.

Section 295-200(2) and 305-80 of the Income Tax Assessment Act 1997 provides that a member can transfer the tax liability that is the assessable income amount determined under 2. above, to the trustee of the superannuation fund. It can be part or the whole of the applicable fund earnings.

Rolling over amounts into super does not appear to be the same as making a direct contribution to the fund. A different set of rules applies. It is clear that section 305-80 of the Income Tax Assessment Act 1997 states that if there is a rollover, then section 295-200 applies. Subsection 295-200(2) provides that where the member has chosen to transfer their tax liability to the trustee of the fund then this amount is assessable income of the fund.

Note: You can only transfer the amount that is the “applicable fund earnings” (the assessable amount), hence any other amount transferred (that relates to pre-residency) would be a non-concessional contribution and caught by section 292-80.

Hence, the limits do NOT apply to the assessable amount transferred to the super fund.  It forms part of the fund’s taxable income and is taxed according to section 295-10 and would be taxed at the low rate (15%). It is only non-arm’s length income and non-TFN contributions that are taxed at higher rates.

When the superannuation benefits are paid from the SMSF, they will consist of taxable or tax free components. A tax-free component is defined under section 307-210 and includes the contributions segment. The contributions segment is found in section 307-220 and is so much of any contributions made into the fund that are not assessable income.  In the foreign superannuation fund case this would be amounts where the lump has been contributed to the SMSF and no deduction claimed on the contribution or where the tax liability of the foreign superannuation fund payment has not been transferred under section 305-80 of the Income Tax Assessment Act 1997 – see above. Those amounts where the contribution has been included in assessable income form part of the taxable components. The proportional approach applies in respect of growth for any lump sum draw down or pension payment until age 60 after which lump sums and pensions are tax free – see section 307-125.

If he draws a pension from the foreign fund whilst an Australian resident, it is taxable as income – sub-division 301-B of the Income Tax Assessment Act 1997.